How To Stop Butterflies Laying Eggs On Vegetables 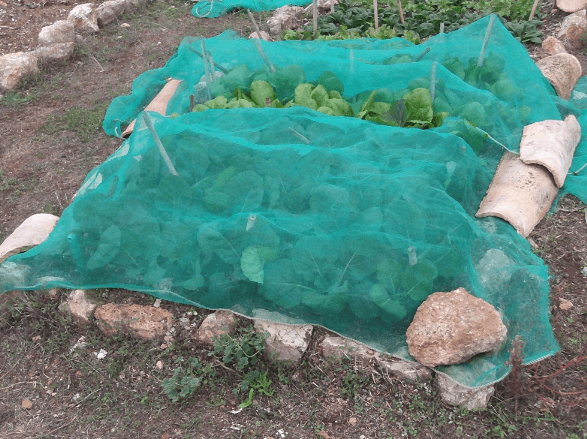 I can’t actually take the credit for this, it is the Wife that came up with the idea. But I thought it would be a great little handy tip for anyone that reads this.

We often get real problems with butterflies laying eggs on our vegetables, notably on the cabbages. It was getting to the point that if you missed any of the eggs then a few days later there was the rather unfortunate task of having to pick off literally hundreds of tiny caterpillars before they ate through the whole bed of cabbages.

The solution is very simple.

We are pretty low tech so the solution the Wife came up with was “bare bones” to say the least. She stuck some sticks in the ground around our cabbage plot and simply put some netting draped over the sticks to cover over the cabbages.

This totally stopped the problem but also gave a few other benefits as well.

The main one being that the young plants did not get battered by the rain as much and the wind did not harm them either.

It is actually a perfect solution. So if you are having the problems we had and want to get stop butterflies laying eggs on vegetables then buy some cheap netting, find a few sticks and in a few minutes of work you will have dealt with the problem.

Then you could always write about it on a garden site and take all the credit!

People who read How To Stop Butterflies Laying Eggs On Vegetables also read....

My main passions include growing vegetables and making amazing compost. I love nothing better than spending my time outdoors and I love writing my Gardening Tips and Garden Tool Reviews here at BIG Granite! I hope you enjoy my article.
More reviews, tips and guides by the Author...