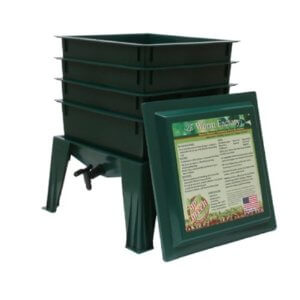 Helping my son with his school science project really opened up a whole can of worms for me. Literally! He had to build a worm composter and the subject quickly became one of complete fascination for us both. Both of us ended up creating wormeries but he made his own whereas I cheated and bought a ready-made one. This was mainly because I didn’t want to have to go through the process of sorting the worms out when harvesting the compost.

It was a toss up as to which composter to go for. I narrowed my choice down to a Worm Factory one. They have either a standard one or the deluxe version which is called the Worm Factory 360. There’s not a whole lot in it but the 360 does come with a few extra features that in my opinion were worth the extra money. However it’s early days yet so I’ll give an update in a few months when it’s really got going.

How Does The Worm Factory 360 Work?

The Worm Factory uses multiple trays, having grid-like bottoms, which are stacked one on top of the other. It comes with four trays but can be expanded to include up to eight. The way it works is very clever – and so simple. You fill the first tray with your organic waste and then once it is full you just add another tray on top and repeat the process. As the bottom trays are turned to compost (which takes a few months) the worms start to migrate upwards through the holes in the base and start munching their way through the next lot of scraps. As I mentioned, this prevents you having to sort through the castings to remove the worms, as they have already moved on.

The Worm Factory 360 sits a bit higher off the ground and allows air to enter through all four sides. This apparently increases air circulation by up to 10 times that of similar composters.

The 360 has bigger trays and a better fitting lid which can be used to hold trays when harvesting.

The 360 comes with an accessory kit which includes a scraper to make it easier to scrape finished compost out of bins, a hand rake for stirring your compost and moving worms from tray to tray if necessary and a color-coded thermometer to make sure your Worm Factory is maintained at the optimum temperature.

The 360 comes with pumice stone which helps with drainage. It also has an instructional DVD.

The spigot on the 360 is a better design which makes for easier leachate draining. By the way you may see the leachate referred to as worm tea. This isn’t strictly true as worm tea is actually a liquid fertilizer created by soaking quality castings, or compost, in water for some time. You shouldn’t really use leachate directly on your plants as it could contain compounds that are potentially harmful to them so exercise some caution there.

The 360 has a twenty year warranty.

*Please note the link above directs to amazon as I have found they offer great deals on worm composters.

Here are a couple of videos showing you how to get started with your Worm Factory 360.

A Brief Guide to Worm Composting

A few months back my son started a project in his environmental science class which involved the kids making a worm composting bin. I have to say it wasn’t something I had tried myself before ...

The Earth Moved: On the Remarkable Achievements of Earthworms

This is just going to be a very brief post as I wanted to let people know about a very interesting book I came across when, as I mentioned, in another post, I was helping ...

Can O Worms: Why I Love My Compost Maker

I want to tell you about my worms, yes, that's right, my worms. What can I say, I love my worms! I bet you have never had anyone tell you that before, have you!? Ok, what ...

I Just Opened a Can-O-Worms

I just opened my Can-O-Worms, and I have some funny looking bugs in there, what should I do? Don't panic, this is quite normal, and until you get your worm environment completely sorted out, you ...

Homemade Compost: The best option for you?

There are lots of different options available if you are wanting to make homemade compost. Let's have a quick look at what compost maker system would suit you best. If you need more information, I ...

"The best place to seek God is in a garden. You can dig for him there" - George Bernard Shaw

Kevin and his wife Lisa are avid gardeners. Their garden is their pride and joy and they spend many happy hours teaching their two young children that there is not much you can't do with six inches of top soil.  Read Full

More posts by the Author »