Hinting For a Cordless Pole Saw

We have a beautiful, Cutleaf Weeping Birch tree gracing our front yard, that was lovingly planted some thirty years ago and then nurtured to survive our frigid winters for many years, until it “took hold” and seemed to look after itself.

Well almost. It does need a little help each spring as our part of the world has a nasty little pest called the Birch Leafminer, that if left untended will wreck the foliage of even established trees, as it burrows into the emerging leaves and literally sucks the life right out of them.

Fortunately, there is an insecticide that has been around for a long time, that effectively annihilates this pest with just a simple application, to either the tree’s trunk, or as a soil drench within the tree’s drip line. And it smells really bad!

Unfortunately, our Provincial Government bowed to pressure from some fringe activists and banned the sale of it a few years ago. As a result, once everybody’s bottles of it got used up, the birch leafminer had an explosion in population and trees everywhere slowly succumbed to their sap sucking appetites.

Banned from Sale – Not From Using

Noticed I said banned from sale? Not banned from using? Well, this insecticide has many uses it turns out, and our neighbouring province uses the product in many horticultural practices. The trouble is as it’s an Agricultural product, the smallest quantity available was a 10 litre jug, not the 500 ml bottle (that lasts years for treating a single tree) that I was used to

However, sometimes when you want something bad enough, you just have to suck it up, reach for the wallet, open it up, let the moths out, and just pay the price! So, on returning from a trip a couple of years ago, I returned with a full 10 liters, enough to treat every Weeping Birch in the entire neighbourhood for years to come.

But I couldn’t sell it, remember?

But nobody said I couldn’t give it away! And that’s exactly what I did. I spoke with most neighbours that had Weeping Birch trees that were a mess of dried out, crinkly leaves, and pointed out our lush green specimen, with its leaf laden branches drooping & swaying in the breeze. They to could have their tree’s looking the same, but there had to be a little barter involved.

The most common barter was a small bottle of the pesticide in exchange for a donation to Stars, our local helicopter air ambulance service. But there were a few barters for some yard help as well. Let me tell you about one that was a big help for me.

Now the branches on these Weeping Birches, by their very nature, are pretty fragile, and seem to have an aversion to wind. Every year there was a number of branches that wouldn’t spring back to life, and needed removing. When the tree was small it wasn’t a big deal as some hand pruners would do the trick, but once it got beyond 20 ft it was a different story.

Charley & His Cordless Pole Saw To The Rescue 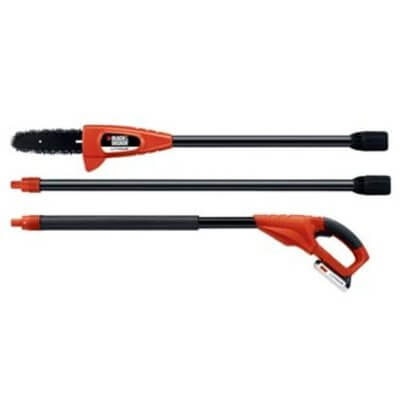 One of my barters was having Charley from a couple of streets away come and prune the deadwood out of my tree in exchange for his bottle of Dimethoate. Now, Charley’s one of those guys that has a tool for everything, and he turned up with the neatest unit, called a Black & Decker LPP120 20-Volt Lithium-Ion Cordless Pole Saw. To say that I was impressed would be an understatement! This lightweight pole saw had all the unsightly dead branches removed in about 10 minutes flat, and Charley never even used a ladder.

I’m a real fan of cordless, in fact one of my favorite garden tools that I own is another Black & Decker product, the ccc3000 cordless electric lawncare centre and the Pole Saw is equally impressive.

The features of this tool that really stood out for me:-

I tried my hand at pruning and was amazed at how light this unit was, and perfectly balanced too. Really easy to use, and it will run for over an hour of pretty constant pruning, more than long enough for my birch. However we also have a few apple trees that have become a bit neglected so ….

Charley has offered to limb my trees in exchange for my “tree juice” for the coming years, but I kind of like my own stuff, so have been dropping copious hints to my better half, leaving the laptop open on Amazon’s Black & Decker LPP120 20-Volt Lithium-Ion Cordless Pole Saw* page, (I even signed her up for an Amazon account), leaving brochures around, & raving to anybody that’ll listen just how great it is.

Do you think she’ll get the hint?

*Please note the link above directs to amazon as I have found they offer great deals on cordless pole saws.

Posts related to Hinting For a Cordless Pole Saw

Keeping The Birch Leafminer at Bay

For many years there has been an annual ritual in our neighbourhood, at or around the first week in June, and the whole neighbourhood get's in a real stink over it! The "ritual" is the ...

It's about 30 years ago that, after living in a neighbouring province, a 15 hour drive away, my wife and I decided to move back to where we are now. Canada is a big place ...

The Value of Eavestrough Maintenance

Living where we do, with such an abbreviated growing season, it seems everybody really values having trees in their yard, as it takes so many years to get them established, but when they do establish ...

When it comes to gardening and taking care of your yard, one of the tools you will definitely require is a weed trimmer of some kind. If you have been using an electric trimmer for ...

Out With The Old One of the very first garden tools I purchased some 30 years ago was a simple little electric string trimmer made by Toro. At the time I recall it was actually ...

Bruce lives in Alberta, close by the eastern slope of the Canadian Rockies. Bruce loves gardening during the short Canadian summer, and enjoys contributing to Big Granite during the long winter months. Look for stories on the things he loves; family, the outdoors & anything to with gardening.  Read Full
More posts by the Author »